Most people involved in dairy production have probably heard, or inherently know that consistency is key to optimizing productivity in cattle. This is true not only for activities such as milking and feeding times, but also for how feed is made, how it is delivered, how the cows consume it, and ultimately the nutrients delivered. With feed accounting for over 50% of expenses for large-scale dairy operations (USDA ERS, 2006), it is logical that producers would focus on ways to improve in areas related to feed.

The dairy industry has made strides to improve batch accuracy on farm by using tools, such as total mixed rations (TMRs), premixes and feeding software. Each of these tools has moved the dairy industry forward and been instrumental in the continued improvement of production per cow. According to a 2014 National Animal Health Monitoring System survey (USDA, 2014), about 55.5% of all dairies surveyed fed a TMR, with most (89.1%) large dairy operations (>500 cows) utilizing one. The widespread adoption of TMRs on large dairies happened over an extended period of time, with the TMR concept being originally presented in 1952 (Harshbarger, 1952). It is clear that, especially for larger producers, there are advantages of the TMR system that make it almost universally accepted. Some of these advantages include; more uniform feed delivered and consumed by the animal, fewer digestive upsets versus feeding forages and concentrates separately, the ability to include less palatable ingredients in the TMR, and grouping cows to better fit their current nutritional needs (Schingoethe, 2017). While some aspects, like sorting, are greatly reduced with the use of TMRs, they are not completely eliminated, as evidenced by composition of the starting TMR and the orts remaining in the ration not being the same.

Likewise, premixes are often brought onto the farm or made on farm to help ensure that proteins, grains, minerals and other ingredients are mixed correctly. The thought is that some of these smaller inclusion ingredients can be mixed in a premix more accurately because they would make up a larger portion of that mix, making it easier to hit targets for those feeds. In some cases variation can be reduced and, in general, the larger inclusion of the ingredient, the more accurately it can be included. Nonetheless, in a study that evaluated mixing uniformity of manufactured premixes, only 50% of the samples had an acceptable coefficient of variation (CV) of less than 10%, whereas, 20% of the samples had a CV above 30% (Silva-del-Rio, 2012). A portion of this could be attributed to manufacturing capabilities, but it may also be driven in part by dry premixes having the propensity to segregate when handled and become less homogenous. Given that on farm equipment, such as front-end loaders, are generally less precise than feed mill equipment, it seems likely that CVs of on-farm premixes are even higher on average than those manufactured in a feed mill setting. The goal of TMRs and premixes is to deliver more balanced and accurate nutrition with every bite of feed the cows consume by reducing or eliminating variation within the ration making process. Nonetheless, while they may help, it is clear that there are still ample opportunities for improvement. Equipment limitations and human error remain at the forefront of management opportunities on many dairy operations as they continue to improve accuracy of ration mix.

By understanding where challenges exist, we can look for solutions that help us improve. In a study of 26 California dairy farms that evaluated how accurately and precisely individual feed ingredients were added versus their target, it was clear that these measures are highly dependent on the dairy and the operators (Dairyherd.com 2017). Figure 1 illustrates how accurately (close to 0) and how precisely (tight the box and whiskers) individual ingredients were added by farms. Farms where feeders were regularly evaluated on their performance and where inventories were more closely monitored, showed large improvements in both accuracy and precision of farms where these things were not monitored as closely, or where there were large tolerances in their feeding software for ingredients. 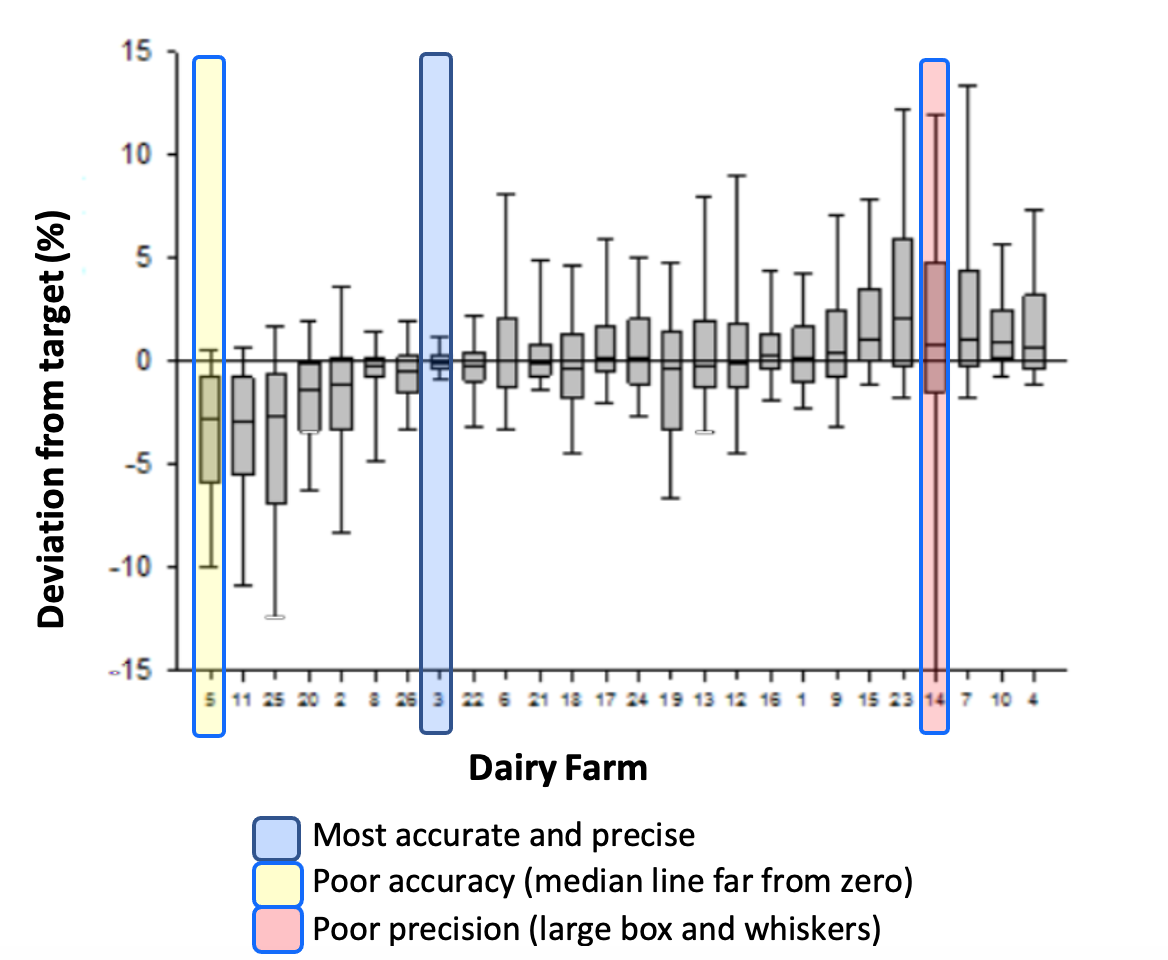 Similarly, within 21 OneTrak™ herds (Figure 2), when deviations were measured, there are substantial differences between farms. We used the absolute value of deviations, so for these calculations an undershoot and an overshoot of 5%, both are considered missing the target by 5%. Amongst these dairies, the average deviation from target was 5.35%, with the lowest average deviation at 1.4% versus the highest average deviation at 9.85%. This is not to say that the dairy averaging 9.85% is doing a bad job, but evaluating data like this allows us to look at challenges a dairy might be facing that they may not even realize they are facing. In this case, one ingredient had huge deviations, that when removed takes the average for that farm down to 4.5%, creating an opportunity for improvement by understanding what is driving deviations around that ingredient and working to find solutions to help reduce those. 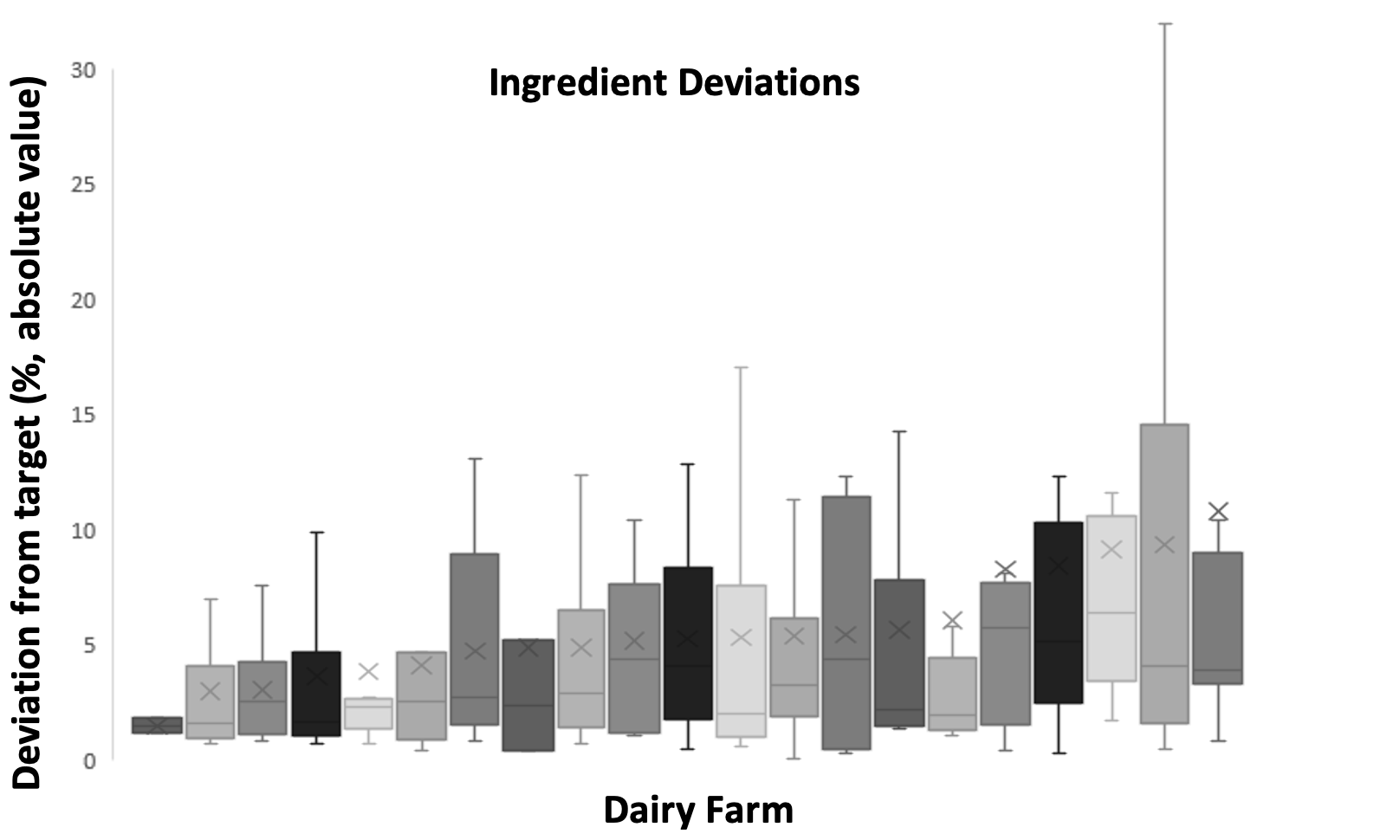 Feeding software is the main tool available that helps producers evaluate some of these parameters as it relates to accuracy and precision of making batches of feed and can help improve consistency and efficiency on the dairy. This, in turn, can improve profitability. In a study that evaluated 14 dairies over 12 months (6 pre and 6 post installation of feed software), production increased by 1.5%, cull rate was reduced by 2.6%, and a feed cost savings of 0.5% after 6 months of using feeding software (Ottley, 2020). While these numbers make the return on investment for feeding software easy to justify, outside of these improvements, there are innumerable other opportunities producers can seize to become better, more profitable operations. An analysis of 23 dairy operations averaging 3800 cows, revealed some interesting information as it relates to how accurately various ingredients can be added to on-farm rations (Figure 3). Some ingredients were grouped into categories such as macro ingredients, commodities, ensiled forages, and long stem roughages, while others were common enough across dairies to list as individual ingredients.

This data clearly indicates that some ingredients are much more accurately added to rations, including corn silage and OneTrak™, with Corn, on-farm premixes and cottonseed following close behind. Interestingly, for these ingredients, all the dairies within the cohort were able to consistently hit targets (std dev between farms between 1.4 to 3.4%). The other important part of this story is the fact that for these 23 dairies, error for commodities (mostly proteins), long stem roughages, fat, and macro ingredients (mostly minerals) was at or well above 10%. Unlike the consistency between farms seen for the 5 most accurate ingredients, there was a lot of variation (std dev between 10.5 to 22.9%) between farms in how well the dairies could handle them with the exception of alfalfa that had a 3.1% std dev between farms. A lot of this variation comes down to size of inclusion within the ration, equipment capabilities on farm, and to some extent, handling characteristics of the ingredients. Corn silage, OneTrak™, Corn, and premix are all a large portion of the total ration and are fairly easy to handle with a front-end loader. Conversely, minerals, additives, and fats often make up a very small percent of the ration; making mistakes more costly, and long stem roughages can be difficult to handle with a front-end loader. Let’s consider an example where a 30,000 lb. batch of feed is being made. One ingredient makes up 1% of the ration with a 300 lb. target in the batch, whereas another makes up 40% of the ration with a 12,000 lb. target in the batch. Which of these targets is the feeder more likely to accurately hit in the batch? If the feeder accidentally adds 50 more lbs. of each ingredient, that means they missed the target for the first ingredient by over 16%, whereas, the miss on the second ingredient is about 0.4%. For small inclusion ingredients, that 16% miss can have both animal and financial implications.

In summary, the dairy industry continues to improve management practices, production and profitability. Tools such as TMRs, premixes, and feeding software continue to be important in helping dairy operators achieve their goals. However, it is imperative that dairies review their data on a regular basis and look for areas where they can continually improve. These will not be the same for every dairy, but there will be something that every dairy can work to improve upon. After reviewing the data and working with dairies across the country on their feeding program, I will leave you with some items for reflection and consideration.

1. Reduce the number of ingredients in ration.

• Fewer ingredients means that there are less opportunities for mistakes to happen.

• Feeders can slow down and take their time to hit targets and thus be more successful.

2. Aim to reduce ingredients that are more difficult to handle.

• These are frustrating for feeders and may not be getting added consistently or accurately into the ration.

• If they aren’t getting added accurately are you getting the benefit from them, or are they more detrimental?

• It is not always possible to eliminate these, but are there things you can do to make handling them easier?

3. Set a minimum inclusion for ingredients or invest in equipment to better handle small inclusion ingredients.

• If an ingredient is included below 2 lbs./hd. in a ration, it can be very hard to hit those targets when it comes to making the ration.

• Premixes can help with this, but as discussed there are limitations for them as well.

• If adding the ingredient is imperative, consider equipment that can help with accuracy, such as a tote system that can weigh and discharge the ingredient. 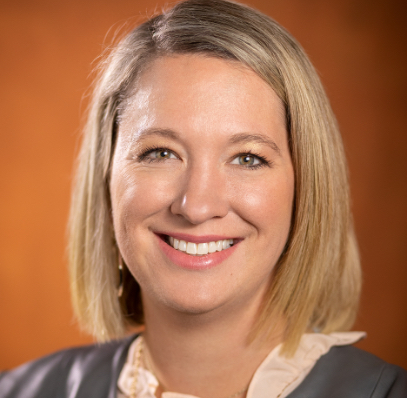